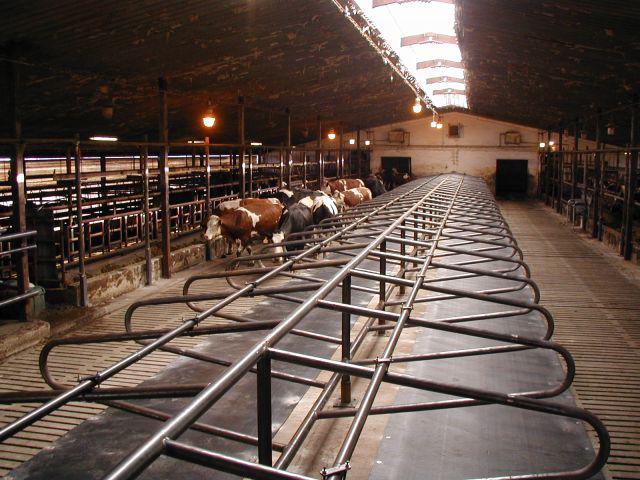 I would like to share with you the experience we gained during the reconstruction of our stables at Agrochov Sobotka a.s.. Construction of our K640 stable began in 1973 and was put into operation in 1976. The stables operated on a slurry farm, the original ceramic single-grate was replaced by concrete three-grate after being demolished. Feeding was carried out using above trough conveyors. The bed was made of 20 mm thick rubber mattresses, cast in concrete. Milking parlors 2 - round tandem.

There have been several changes over the years. Slurry management still remains, but a new 120m long feeding table was built and a circular milking parlor with 36 milking places was replaced. In 2004, we decided to replace the old barriers in the stable, and on that occasion a problem arose with the old, partially loose, but sometimes completely missing, rubber mattresses. Given the age of the stable, which had been in operation for 30 years at the time, we were looking for a quick and affordable solution that would preserve as much as possible the existing bed system to which the cows were accustomed.

We teamed up with a manufacturer of rubber flooring, the company KSK-BELT in Teplice, which already had experience with the use of its products in animal husbandry. With regard to the financial side, we opted for a 6mm thick rubber floor. The advantage was that the rubber carpet was in a roll of 40 m and a width of 1.6 m. The original bed was 110 cm wide and there was a concrete strip between the rubber mattresses. To compensate for the height difference caused by the already missing rubber mattresses, we used discarded mine passes to make up. Then we could spread the rubber carpet continuously over all the beds, so we also covered the original concrete strips. We have expanded the bed to 120 cm. We anchored with bolts to chemical anchors. We managed everything on our own and with our own resources. The new rubber mats met our requirements with regard to bed cleanliness and maintenance. This achieved increased udder hygiene after milking. Over time, we have found that if the rubber carpet were wider and thicker, the cows would probably not be caught behind the edge of the carpet when lying down and getting up. The mattress tore so often and the dirt got under it. This led to the formation of bumps under the mattresses.

When we decided to replace the rubber carpets in 2012, we reunited with the company KSK-BELT, as and after the agreement we bought new carpets, this time in a width of 2 m and a thickness of 14 mm. The bed system has been retained. After several months of experience, it seems to us that these mattresses will fulfill their function well. Over time, we would like to replace all the beds. There would certainly be many other places in the stables where rubber carpets would find their application. At drinking fountains, scrubbers, in places where minerals are hung, but also in movement corridors, in waiting rooms or laid on grates. They can be used in places that are not very popular with cows, ie areas for hoof treatment, veterinary procedures, etc. In our stables, they are suitable where it is not possible to land with straw, slurry substrate, sand, etc., because we can not use mechanization in them. .

At the entrances to the individual sections, which form sloping concrete, we used the so-called rubber steps, which are specially manufactured for horse trailers, for the animals to enter the transporter. The rubber sills have worked for us, the cows do not slip when crossing sloping surfaces. The cows lie well on the mattresses, are well maintained and insulate the cold. They are not harmful to health. They meet the main requirements for good housing, which is reflected primarily in animal satisfaction. Rubber carpets can find a wider application in animal production - housing cattle, horses, but also pigs and piglets. We will be happy to share our experience with you and, if you are interested, we will show you the housing of our cattle. Author of the article: Jiří Rulc - chief zootechnician, Agrochov Sobotka - The article was published in the weekly Zemědělec - No. 41 - "The effectiveness of dairy cattle breeding". 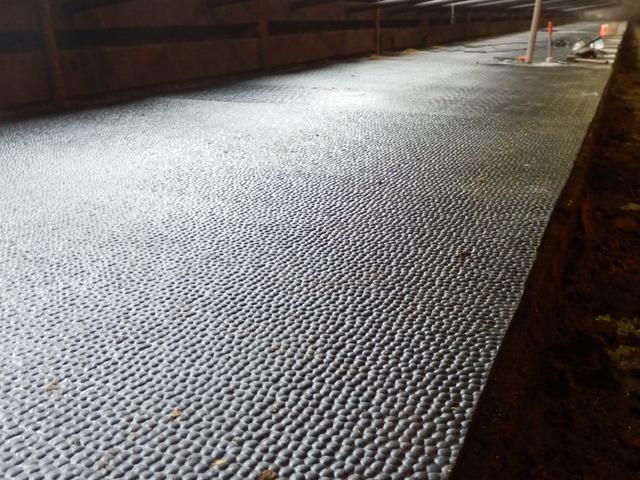