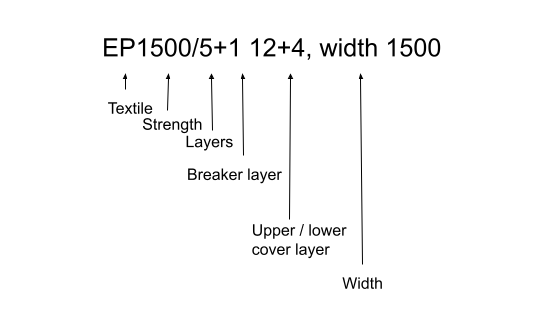 If you are choosing the right conveyor belts for a coal mine, power plant or a sand quarry you should know about the basic parameters that distinguish the conveyor belts. Conveyor belts are usually specified as shown below:

Conveyor belts can be categorized based on the material of the inner layer:

The advantage of EP belts over P belts is the lower elongation of the belt under the material load.

Tensile strength means how much the belt can be elongated in given conditions without serious damage of the belt.

The unit is computed in N/mm2.

Number of layers in conveyor belt

Number of layers of the conveyor belt specifies how many textile or steel cord layers are used in the core of the belt and thus composes the final thickness and strength. Individual layers are joined with 0,5mm to 1mm thick rubber layer.

Upper and lower cover layer of a conveyor belt

The upper cover layer defines the thickness of the cover layer on which the load is transported.

Conveyor belts can be further divided based on fire resistance and other properties:

How can KSK Belt help

Besides conveyor belts we can also offer conveyor rollers from our own production.